CASE STUDIES; SOME PROJECTS WE’VE WORKED ON WITH CLIENTS

Check out our case studies detailing some of the incredible results our clients have had through engaging our services.

This is just a wee look behind the scenes at a handful of the clients we’ve had the honour of working with.

Get in touch if you want to find out how we could help you on your journey.

Masterwood Joinery designs and manufactures high specification kitchen and bathroom cabinets and commercial joinery. Based in Cromwell, the company strives to deliver the ‘wow factor’ to home and commercial interiors throughout Otago, the Southern Lakes District and Southland.

Southern PR was engaged when Masterwood was named a finalist in the KBB Design category (kitchen, bedroom, bathroom) of the prestigious Society of British and International Interior Design’s International Design Awards. Finalists were chosen by a technical panel of judges (accounting for 70% of marks), while the remaining 30% was via public vote. Southern PR’s objective was to gain Masterwood as many public votes as possible for its outstanding kitchen entry, while simultaneously raising the company’s profile throughout New Zealand. The competition was fierce, with businesses from 48 countries up for awards across 14 categories.

Masterwood Joinery was thrilled and delighted to win the award at a ceremony in London. Southern PR’s efforts reached 35,000+ people on social media and stories were published in the Mountain Scene, Stuff.co.nz, Otago Daily Times, Scoop, Homed and it’s local Cromwell Bulletin pre and post win. Following the award win, regional and international enquiries flooded in to the team at Masterwood Joinery for their services.

This was an exceptional success story for a small town company which, quite literally, ‘took on the world, and won’. Winning an SBID award is considered the global pinnacle of interior design excellence. The two Masterwood representatives who attended the awards were said to be “crowd favourites” and undoubtedly the most excited winners. 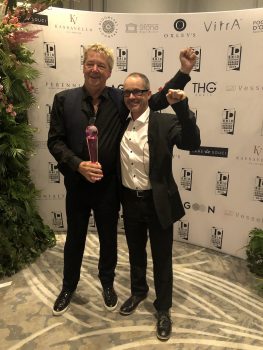 Nestled in the heart of Central Otago’s founding winery, Gibbston Valley Lodge & Spa set out to make its mark on the international luxury accommodation market. The Lodge adds another layer to the already hugely successful Gibbston Valley Winery brand, encompassing wine and culinary excellence with a 5-star experience. The Lodge includes a wine education theatre, private meeting rooms, and unique indoor and outdoor spaces for intimate boutique weddings. It’s also home to a semi-private restaurant and spa alongside 24 villas.

Southern PR were engaged to help launch Gibbston Valley Lodge & Spa. The objective was to build brand awareness, demonstrate connections to the local community and position the Lodge as an exciting new addition to the luxury accommodation market.

The foundation of our approach was built on what the Lodge wanted to represent, its overarching objectives and ethos. We had a particular focus on sustainability, the ‘faces’ of the business and operation as well as wine and food connoisseurs. The Kiwi Birdlife Park is a national treasure — it holds and displays over 23 species of native wildlife as part of nationally-managed programmes, and takes part in a number of breed-for-release programmes. It has also been responsible for planting over 18,000 native plants providing essential food and shelter to wild native birds. The Park has been owned and operated for over 34 years by a local Queenstown family – the Wilsons.

Southern PR was engaged by the Kiwi Birdlife Park in the wake of the Covid-19 national lockdown. Having been completely reliant on visitors coming through the door and souvenir sales, the Park was suddenly receiving absolutely no income during lockdown and with borders closed. Unfortunately, although very much part of the family, the wildlife were never going to qualify for the Government wage subsidy. With no money coming in, it wasn’t going to be long before the Park would be unable to keep their precious animals housed, fed and happy. Once allowed to reopen, the ingenious idea of ‘Koha for Kiwi’ was hatched – encouraging locals and what domestic visitors there were around to gain entry for a donation during the traditionally quiet month of June. SPR’s goal was to get the word out about the initiative and paying customers through the door during June, and increase awareness thereafter.

Here at Southern PR we knew this was a special story combining many unique elements which would resonate strongly with local and national media. The conservation aspect of this campaign was crucial. While this was a business struck down by Covid-19 along with many others, the story had so many more elements — the Park had been making a huge social impact to Queenstown, and the planet, for over 34 years. A very important aspect to our storytelling was the local family behind the Park – a third generation local Kiwi success story which now needed community help. We used a combination of traditional and modern PR approaches for this project.

Nothing highlights the success of this campaign more than a busy Kiwi Birdlife Park and happy staff. The doors swung open and people responded to the plight of the Park and the threat of closure in their thousands. The initiative was picked up by a wide range of local and national publications including the Mountain Scene, Stuff, Scoop, Voxy, Inside Tourism, Lakes Weekly Bulletin and more. This significantly helped spread the word. SPR’s key goal was to get national TV coverage about the initiative, which was achieved. Seven Sharp (average audience of 105,900 in 2019) came to Queenstown and covered the story with a four-minute piece on ‘Queenstown’s undiscovered gem’ as well as a Tuatara appearance and reiteration of the Koha for Kiwi message on TVNZ’s Breakfast (average audience of 195,600 in 2019). The Wilson family, Kiwi Birdlife Park management and staff were thrilled by the success of this campaign. 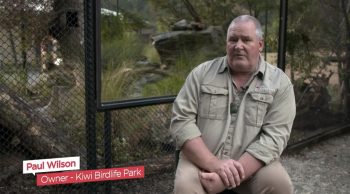